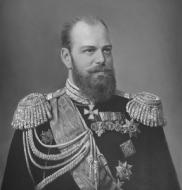 Alexander III, the son of Alexander II, was the thirteenth Emperor of Russia. During Alexander's reign Russia fought no major wars, for which he was nicknamed "The Peacemaker" (Russian: Mirotvorets). Due to limited reign of the Emperor and small issue of coins, the coins of Alexander III are very rare and demanded items for collectors all over the world. Alexander III restored portrait of the emperor to Russia’s gold and silver circulating coinag after a 90-year absence. Following Paul I, pattern and commemorative coins had been struck bearing images of members of the ruling family, but his successors did not wish to bring portraits back to the standard currency, and so national emblems and inscriptions became the norm. The coins of Alexander III are of great value for coin collectors. The reason is that the issue of the coins was limited and the quality of the coins is rarely high. The only commemorative of this period is Russian Silver 1 Rouble Coin minted in 1883 in honor of the coronation of Alexander II. The artist of the portrait on the coronation ruble was Leopold Steinman. To get a list of coins and their price, press the catalog section you need.